What is FTC?
The FIRST Tech Challenge is one of 4 programs offered by FIRST, an international robotics organization.  Every season teams of 7-12th grade students are challenged to construct a robot capable of participating in a highly competitive field game.  After designing, building, and coding a functional robot, teams  compete in three regional qualifiers, each offering an opportunity to advance to the State Champions.  From the Sate Championship tams have the opportunity to advance to FTC Worlds, the highest level of competition.  FIRST highly encourages friendly team interaction and sportsmanship which is embodied in their motto: "Gracious Professionalism."  For more information about the FIRST program, visit https://www.firstinspires.org/
​
Our Approach to FTC:
​Our club’s approach to the FIRST Tech Challenge competitions may be slightly different than other teams.  While we desire to build a competitive robot, we also want to teach our students important skills that will be beneficial to their future success.  Therefore, significant time has been spent developing learning activities that have focused on the engineering process, programming principles, and marketing concepts. Our team also focus on the 4 C's of 21st century learning; Critical thinking, Creativity, Collaboration, and Communication.  For more information on our team's approach to FTC visit Our Philosophy
During our rookie year (16-17 season) our team built  FIRST’s traditional Pushbot. Once we successfully constructed our initial prototype, we examined the features that would be needed to effectively compete in the Velocity Vortex challenge.  It was determined that our Pushbot robot would be unable to perform many successful tasks.  Therefore, a major redesign effort was required.  While we anticipated adding additional features for future competitions, our newly designed robot was equipped to sweep loose particles from the playing field and shoot them into the corner scoring zone.  Furthermore, we had developed a simplified device that could be maneuvered to press beacon buttons.

At the beginning of the 2017-2018 season we began working with last seasons (16-17) drive train to develop an experimental lift and grabber mechanisms. We later decided that instead of using mecanum wheels, we would employ a chain drive. After constructing the base of our robot, we moved on towards developing an effective claw mechanism. We went through numerous designs and continually worked to perfect it.  The final large design challenge was the Jewel Displacement System (JDS), commonly referred to as the Jewel Knocker Offer (JKO), to knock off the opposing alliance color's jewel.

Our design team formed three groups at the beginning of the 18-19 season to work on our drive train, lift system, and latch system.  The '18-'19 drive train operated on four Rev NeverRest 60 motors and was equipped with four mecanum wheels for multi-directional steering.  It also had four ‘anti-high-center’ wheels positioned in the middle to prevent the robot from high-centering.  Our mineral lift system, termed the Mineral Acquisition and Collection System, or MACS,  was redesigned three times before we perfected it.  Using a linear slide arm for minimal robot moment our final design  adopted a back-to-back intake, rather than our original side-to-side intake. The MACS ran on only one motor, not two.  The these changes increased precision in intake as well as output.  The final robot component, our lift system, followed many FTC teams in using a lead screw.  This was attached to aluminum extrusions following a 3D printed track.

The SKYSTONE Season brought our most advanced robot yet to the playing field.  Our drive train ran on four NeverRest 40 motors.  In order to create a more compact and maneuverable robot we decided that a Mechnam wheel base, encased in Plexiglas would be most effective for navigating the competition field.  Our intake system to suck in blocks was composed of Tetrix motors spinning two rubber, semi-flexible wheels.  The wheels sucked the blocks in so that the claw could grab them and stack them in an efficient and precise way.  Two guide bars kept the stone straight to allow for a smooth grab by the claw.  Our lift and arm was simple, yet effective, functioning as a pivot with a self-leveling chain system.

Despite the difficulties of COVID, the Ultimate Goal season provided the team with immense learning opportunities.  Our robot was designed around four central components.  In conjunction with a former team member we designed a proprietary drive train that optimizes usability and accessibility.  The "CIM Drive" as we call it is a compact drive train that is contained in two separate units driven by 2 NeverRest 40 motors.  Our intake system was composed of  a NeverRest 40 driven system of surgical tubing axles, guiding foam rings up along the 60° inclined intake pan to the Shooter Mechanism.  A servo fed the rings toward our launch wheel, a green compliant wheel, spinning at 2,000 RPM, sending the ring flying, on course, to the goal.  Finally, our wobble arm  was comprised of a servo power clamp that grabbed wobble goal, and pivoted, raising the goal into the air for maneuverability over the field wall.
​
Entering the Freight Frenzy season, the design team set out to fully CAD our robot prior to construction.  Accomplishing this task, the team constructed our most intricate and compartmentalized robot since our entrance into FTC!  The robot is broken down into four parts. One of the parts is the CIMDrive drivetrain,  a compact system of mecanum wheels, allowing the design team to remove specific components of the robot for easy repair. This year the team had put much effort into creating an efficient intake system, which the team has accomplished by designing a linear slide that can collect cargo from anywhere in the warehouse. The team 3D printed an intake cup into which cargo was loaded, taken back into the robot, deposited in the outtake system, and scored in the shipping hub. The outtake system consisted of a linear slide mounted in a particular angle as well as an outtake bucket that dropped a block or ball into the second or third level of the alliance shipping hub. Finally, the last part of the robot is the carousel wheel, also known as the duck wheel, which is a very simple, yet efficient mechanism. Composed of an AndyMark Green Compliant wheel powered by a motor, the Carousel Wheel has the power and grip to quickly spin cargo pieces from the carousel into the field of play. 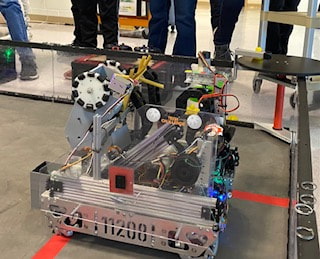 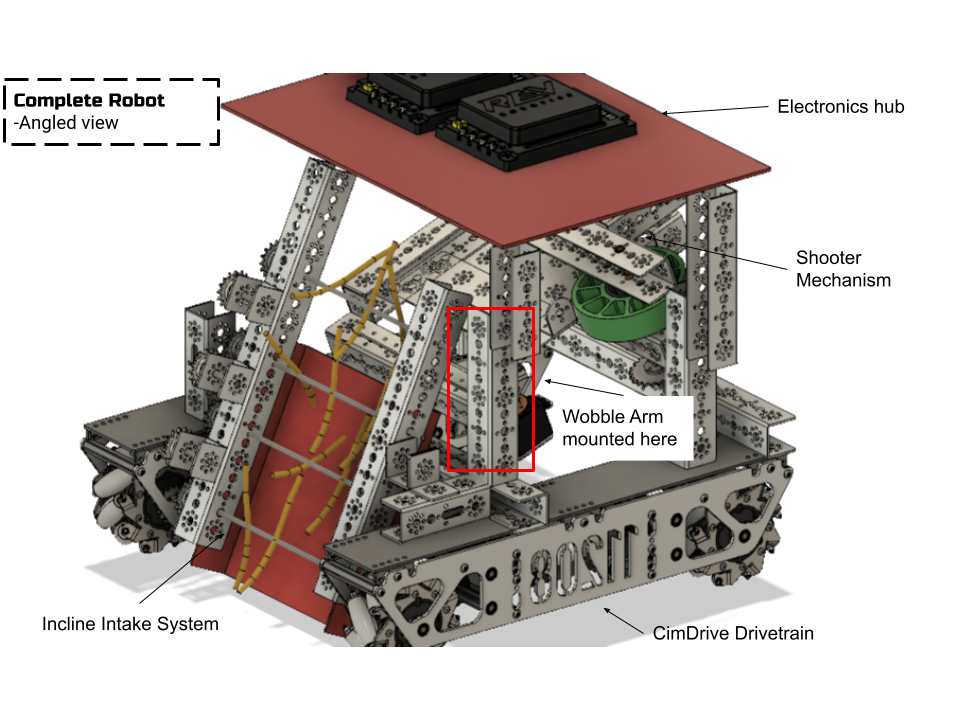 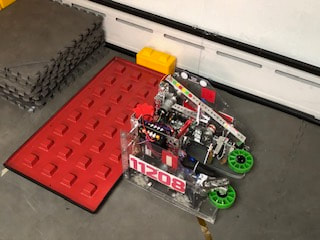 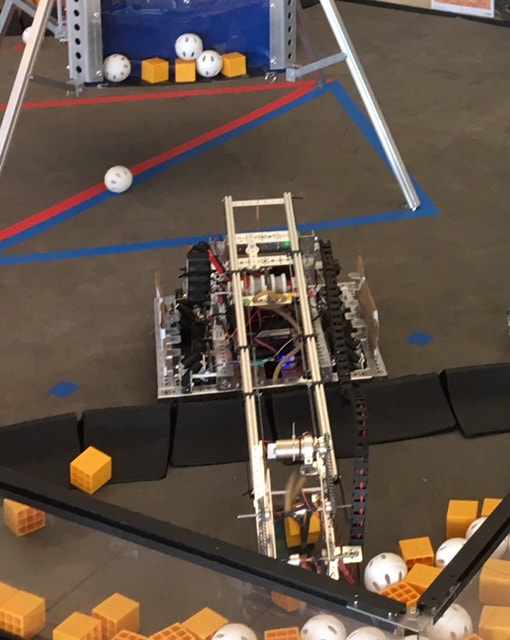 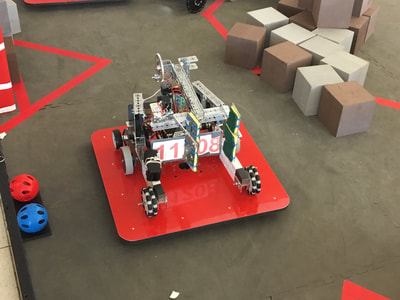 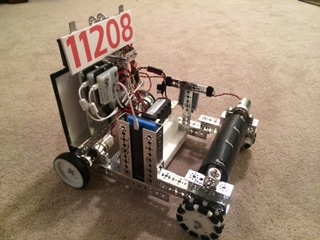 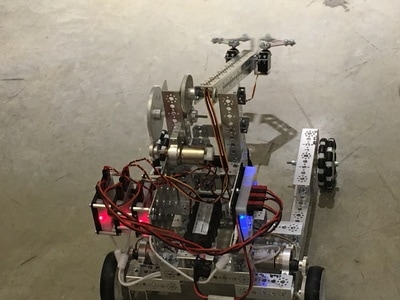